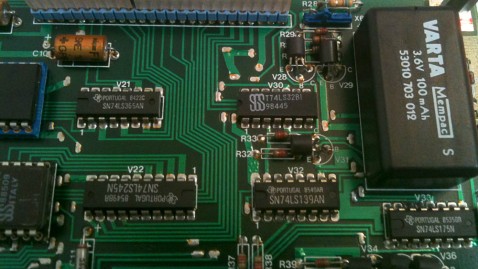 Sometimes, when I want to remember what the world used to be like, I go to a local used bookstore housed in a  former glove factory. There, amid the dusty wooden floors and endless miles of shelves lit by fluorescent lights on pull chains, I like to thumb through old photography books.

There are books with glossy slip covers, faded where they could see the light; books with red or green library bindings and crude spine-stamping; and yellowed pamphlets with holes for spiral binding.

There are manuals telling the average person how to poison himself performing color negative development at home, books explaining studio lighting, and various materials describing how to do processes that had to be done once and done right.

One of the most tragic things about the dismantling of film photography, and particularly the Kodak empire, is the loss of so much science. Years of people’s lives went into the products and quality control and testing and data booklets for products that in the past decade have become townsmen of a stiller town. Those scientists have long since moved on; the research labs have been razed; and there is no one left to make any new products.  Even for the handful of historic best sellers remaining in the current Kodak, Ilford and Fuji lines, it is questionable whether the people running those lines would have the capital or know-how to recover from a major equipment failure or change in environmental regulations. They are caretakers and sellers – but no longer creators.

Writing from the perspective of the twenty-first century, it seems strange that anyone would ever mix plastic, animal glue and silver halide crystals to do anything; it barely seems a step away from alchemy. Yet replicating this alchemy – the object of nearly every digital photography R&D exercise – has required gargantuan engineering efforts and massive computational power. This is a testament to the quality of the work that went into silver halide technology. Slide rules, graph paper and microscopes made it that good. But with such primitive tools came a primitive faith – that a seemingly opaque piece of film could be subjected to a liquid sacrifice, blessed by gestures, and yet result in a viewable image.

Why does film seem like such a big deal amidst a sea change in everyday technology? Part of it may be that when people think of photography, they imagine artifacts of film: fading, sprocket holes, edge printing. There is some embedded belief that the fact of ephermality can only be expressed by a fixed, identifiable and conventional state of decay: thus Instagram.  Others seem to believe that  negatives and slides visible to humans are the only real method for long-term storage or “real” photography, notwithstanding the gradual disappearance of the means to turn them into finished images. But it may also be that various people have various points of nostalgia and that photographic enthusiasts are a self-selected set.

Even among the film faithful, there is little consciousness of how far they have drifted. The semi-digital workflow that makes it possible to use film and display its images given the pace of modern life is also the one that divorces film from its historic antecedents and all that underlying science: Frontier systems digitize film, correct away its original tonal response, and laser-print copies of images on silver paper. The essential use of the negative for projection printing has changed. There is little discussion of this, and seldom does Captain Kirk appear to tell the Yangs that their prayer is in fact the Constitution.

Things are in a constant state of evolution, and as Tancredi so aptly put it, «Se vogliamo che tutto rimanga com’è, bisogna che tutto cambi.»

3 responses to “All that science”