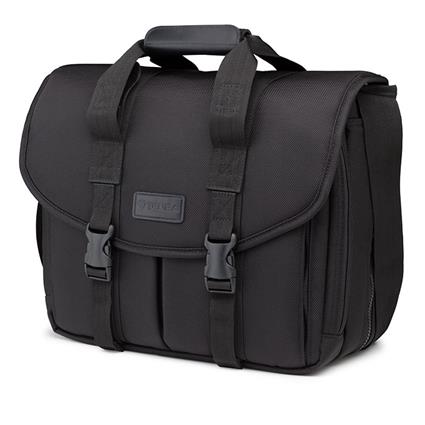 Note: this discussion starts with the P415 originally released in 1985 (and is based on an example purchased in 2003). The re-introduced P415  (released December 2013) has some changes as noted.

If we are going to discuss a camera bag, let’s at least talk about what makes a good camera bag in general:

These considerations are why the Platonic form of a camera bag is a padded fabric box with padded dividers. a top flap that exposes all the contents to access, and a shoulder strap. The Domke F-803 is an excellent exemplar, and it is the direct competitor to the Tenba P-415 that is the subject of this article.

Styling. It is a bit ironic that this is described as a “briefcase,” except that it is what a P415 came to resemble given developments in other luggage. In 1985, men generally did not use shoulder-strap briefcases; they used handle briefcases. When this came out, it would have more resembled a tote bag or a carry-on overnight bag. Only in the mid-2000s did this come to look like a laptop computer bag or a shoulder-strap briefcase. Styling is extremely conservative; it’s just black ballistic nylon with black straps and black leather tags (to Tenba’s credit, they are simply embossed and not inscribed in bright colors). Lining is a smooth grey nylon fabric. Most zipper pulls are rubber-coated.

Carrying. This bag has two carry modes. It can be carried by a handle on the top (the top flap must be latched) or by a shoulder strap with a comfortable pad. If you want the strap to go away completely, you can zip it into the gusset used for expansion (so obviously, this is not an option when the bag is “expanded.” The original version of this bag could take optional backpack straps (these anchored at two rings in the lower rear corners of the bag and two under the handle). The backpack strap accessory and its connection points are now history. Although there is a near-universal tendency to label bags like this as “courier” or “messenger” bags, they are in fact shoulder bags. Real courier or messenger bags are more specifically designed to be stable on your back wile biking or hiking.

Main compartment. Tenba says this “holds a DSLR with a battery grip, an attached 70-200 f/2.8 lens, two additional lenses and a flash inside.” This really needs some revision and/or explanation. First, if you are using the supplied PI-13 insert (the bag has no bottom padding) and have not expanded the bag, this will barely fit a camera like a base D700/800 (no MB-D10) plus a long lens. The picture below is more indicative of the actual capacity; note that the shoe-mount flash is the entire width of the insert. In the default configuration, try to avoid thinking that this is a battleship DSLR bag – because it is not. The padded insert/dividers are not stiff enough to drop a DSLR in “nose down.” All of that said, this is a good fit for small DSLRs, mirrorless or rangefinder systems, and small medium-format cameras. 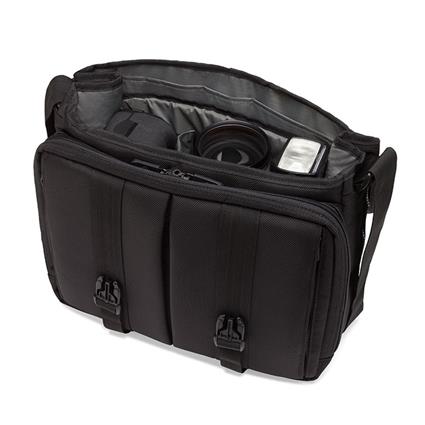 The main pocket has a nylon septum in the front and back that separate the padded insert from the padded sidewalls. Though originally designed for magazines or writing pads, these are actually the ideal places to stick a laptop (in “expanded mode” the bag can take a big-screen Dell e6420), netbook, or tablet.

Opening the expansion zipper allows the main compartment to expand a couple of inches front to back, and this also gives you a couple inches left and right of the padded insert. This is quite useful; you can stick a shaving kit and some clothes (or a brick of 120 film) in the extra left-to-right space.

The front organizer is accessible by undoing a wraparound zipper. This organizer varies between the two versions of the case (old and new). This picture is the new one: 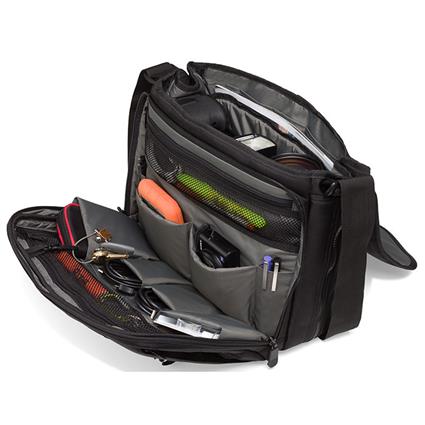 Hump pockets: On both versions, there are two humps on the front section of the bag that are just padding; the humps have two side zippers that allow you to access two items the size of a Sekonic L-358 meter.

Key hook: On both versions, this a very handy feature when traveling.

Mesh pockets: Both versions have one mesh pocket on the front (flap) and back of the organizer. These were designed to hold 35mm film cans, but today they hold lens pens, Speck Grabbers, SD cards, small cords, etc. For scale, the mesh on the front part holds two Gepe waterproof SD card cases (6 cards total); the rear holds three (9 cards total).

Padded internal pockets: this where the design changed significantly. On the original, between the front “hump” pockets (shown above with a red thing in one and a filter case in the other), there is a single pocket that holds 5 rolls of 120 film. On the new version, here are two smaller ones. On the rear side of the organizer, the old version had two equally-sized padded pockets (holding 7 rolls of 120 or an equivalent-sized object like a paperback book, Walkman… er, portable hard drive), one with a velcro flap over it. The new vesion omits the flap and includes more pen pockets. The flap is actually useful for restraining wound-up cords that want to un-wind. 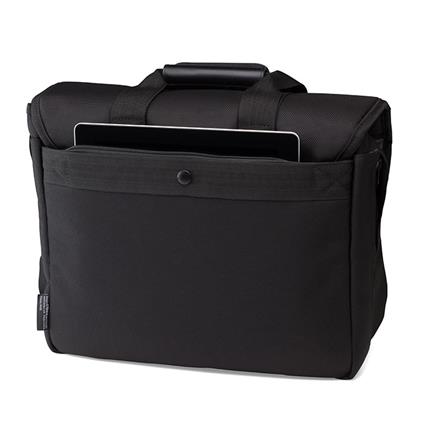 This is the somewhat dodgy “tablet” pocket.

Tablet pocket: be very careful. The P415 has a full-width, zip pocket between the slot for a roll-on bag and the main bag. This pocket is not a great place to put tablets because it is (a) near the outside of the bag; (b) easy for others to get into; and (c) vulnerable to impact from the handle of your roll-on bag. The old version of the P415 also had a zipper pocket inside the zipper pocket – and that metal zipper pull would scratch the hell out of a tablet. Leave this one to magazines/boarding passes and stick your tablet in the internal area discussed above.

Attachment point for roll-on bags: one useful thing about this bag is that you can slip it over the extended handle of your roll-on bag. The bad news is that when the P415 is loaded, the 2″ of webbing for the attachment, even with the snap closed, is not always enough to prevent the bag from swinging backward. More modern bags have a handle attachment point that runs most (if not all) if the height of the bag, providing more stability.

Strengths in use: Usually, a camera bag is something else trying to be a camera bag. The P415, by contrast, is a camera bag that is capable of serving other purposes, such as being an overnight bag.  Extended, it can take a shaving kit and extra clothes, in addition to a decent amount of photo gear. My P415 has done yeoman’s duty in Europe, Africa, Asia and South America. The zippers and connectors are well thought-out and quiet. The only velcro on the modern version is in the umbrella loop, top handle (why does this separate at all?) and the interal dividers. The original has only one additional velcro point, the covered organizer pocket. The fabric has proven to be almost indestructible (as “ballistic nylon”probably should be), and the foam has now held up for more than a decade. The leather parts are a little dry, but none of them have any relationship to the function of the bag. The design in general has aged well. Although it was designed in an era where laptops did not exist, where cameras were big, and imaging was limited by how much film you could carry, the spaces in the bag are still usable for modern photo appliances.

Weaknesses in use: The P415 has the typical vices of the open-top shoulder bag and exactly the same ones as the Domke F-803: there is an open space between the top of the bag and the flap over it. This allows faster access to equipment without dragging painted objects over zippers – but it also allows small objects to fall out if you are not careful. That this is in any way water repellent would be an overstatement. The nylon will repel rain for a short time, but within about 20 minutes, water will start making its way into the top cover. It will be quite a while before that moisture gets to your equipment, though. It is still a lot more effective than any form of canvas. The multiplicity of pockets can also get you; I thought I had lost a NEX-5 charger and battery in New York; it surfaced in one of the crevices of the bag right after the return period for the replacement was up… Finally, the only thing to have failed, long-term, is the pull on the zipper that operates the expansion figure. It’s not expensive to repair, but the YKK zipper pull was easily bent.

Upshot: the P415 is a good counterpoint to Domke hair-shirters and the over-designed, under-functional flavor of the week from San Francisco. In its way, it is minimally designed (no flaccid water bottle nets, no stripes, no modular attachment points) and maximally functional, without presenting many pickpocketing opportunities (or enticements). There are a lot worse ways to spend the $169 MSRP on a bag. I can think of few better ones.