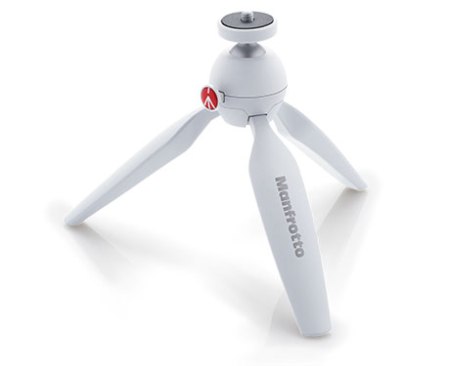 Small camera supports represent the Kobayashi Maru scenario: an unwinnable conflict between competing considerations. For keeping a camera steady, particularly for video, a regular tripod starts large and gets larger – and the little “mini-pods” are useless (in many cases, the legs only spread to one position). In any event, the heads of most of these devices are not up to holding anything more than a flat point-and-shoot camera of the early 2000s.

The Manfrotto Pixi, which you can buy at Target as a $25 impulse (same price as Amazon before sales tax, so no need to showroom), is an interesting addition to the mix.  Constructed mostly of ABS plastic with a pushbutton ball head (push to move the ball, release to lock), it is probably the sturdiest baby tripod currently made and definitely the best one ever sold at a convenience store. The design is very organic (anatomic?), particularly in white (it also comes in black and some two-tone combinations like red/black and pink/black).

Opened, it raises your camera approximately 5 inches and puts it on an equilateral leg spread of about 6 inches on a side. For small tripods, the added height is always negligible. The real thing is being able to change the angle of inclination of the camera (consider that you can put the camera and tripod on top of any box-like object and use the ball head to fine-tune the aim). For this, the Pixi has a real ball 25mm ball head, machined with grooves to be clamped. The platform is rubberized (as are the feet) and features the ubiquitous 1/4 x 20 tripod thread. If you have gaffer-taped the bottom of your M, it will make a good contact. For a Rolleiflex, on the other hand, you might want to make sure your 3/8 to 1/4 bushing is flat on the bottom of the camera. Heavier cameras with off-center sockets (like Leica M film cameras) may give awkward balance.

The push button on the Pixi’s ball head has been the subject of some discussion; it is stiff, and it should be stiff – since it is the only thing that keeps your camera from going nose-down on the table.

The weight capacity is another issue. The capacity is nominally 1kg (2.2 pounds). People have put much larger loads on this tripod, and it indeed will hold the weight. Dynamic load capacity, however, is not the same as static – and as such, the steadiness will diminish as the load (and stress on that load) increases (consider also wind and vibration in the environment). Understand that operating the controls on a Leica M with a moderately sized lens (which can hit 3 lbs) will cause deflection in the legs when you press the M[ovie] button. So 1kg really means 1kg* unless you are willing to wait for a little “settling” at the beginning and end of the work (and with telephotos, you may need to use a remote release – the Pixi documentation specifcally mentions 85mm as the limit). So in summary:

*Unless you are talking about the body, which is limited to 650g.

The static/dynamic weight thing afflicts real tripods too; one of the best tripods going is (was) the Linhof 2- or 3-section (Profi-Port-Stativ series), but that 5kg weight capacity means that heavy cameras need to be treated gingerly. In fact, Linhof’s own Super-Technika cameras were almost too heavy for these tripods (you would use a cable release, though, under most circumstances).

Closed, the Pixi operates as a handle. It is possible that most true mini tripods could function the same way; however, the legs fit together such to create a handle for over-the-head work or for video work (one would suppose, if you like the “steadicam” look). For overhead work, it helps to have a camera with an articulated screen that can be pointed down. It is unclear in use whether it actually helps steadiness for handheld video; the benefit seems to come mainly from the extended grip.

Is it worth it? Anything that costs less than your monthly cellular usage is probably not worth agonizing about. The Pixi is highly functional and attractive – and likely merits the 7 oz in your bag if you think it would help your work. And the color? White. Definitely white. Not for that Space Odyssey thing but rather because light-colored objects are harder to lose in camera bags.