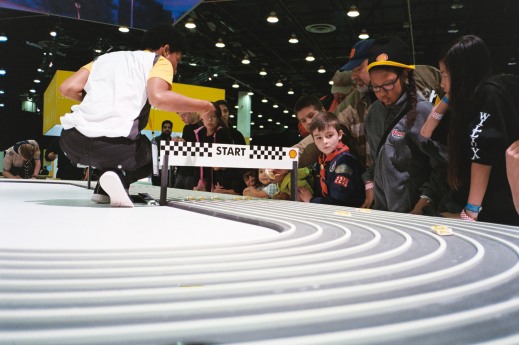 First entry in the Year of the Point and Shoot.

I have been shooting cheap autofocus cameras all year. It started with a broken M240 (thanks, mini-me, for knocking the RF out) and has been going on in a hail of Kodak Gold 400, ProImage 100, and TMY. For some reason, this also became an excuse to buy a Minolta CLE and a Konica FT-1 half frame(!), neither of which are p/s cameras (but are small in some way, even if just the negative size). As to the choice of film, if you are going to relive the 1990s in camera technology, why not shoot like it? There are lots of things to talk about with compacts, so stay tuned over the next few weeks.

Design and construction. The Yashica T4 Super D (called the T5 in some markets) is the end of an evolutionary line of cameras built around Carl Zeiss T* lenses. Kyocera, of course, was making Contax SLRs, G series, lenses, and compact cameras. It is interesting that the company made some products with these lenses under the Yashica house brand.

The T-series is all-plastic. The T4 Super comes in black and titanium color. Mine is black. Like my heart. The only rubberized surface is a small 1 x 3cm rubber front grip pad. The Yashica T product line evolved from boxy and angular T to a rounded brick shape in the T4 Super D. The T4 Super D is weatherproof. Water can get inside the lens cover, but per the instructions, water cannot get into the inner parts. I am not going to test this.

The camera is not small. If you think this is the size of a Stylus Epic (mju-ii), you are sadly mistaken. The size can work for you if you have long fingers.

Loading up. The back unlatches with a very tight little latch, and it shuts by pressing the back firmly closed (trying to operate the latch does not make this easier).

You will need one CR123 battery to make it work. It is not clear if it will work well with rechargables, though a camera like this is not designed to shoot the thousands of rolls of film that would make lithium-ion batteries worthwhile.

Film loading is that weird right-to-left thing that was popular with point-and-shoot cameras. There is no clear reason why manufacturers did this; the practice is absent on high-end Japanese compact cameras. The only ill effect is that your pictures appear “upside down” compared to the edge printing.

The brain. The camera has the typical 4-bit brain of a Japanese point-and-shoot of the 1990s. You can select auto flash, redeye flash, no flash, and infinity focus. And that is it. Oh yes, you can also pick self-timer. Bring your selfie stick!

No exposure compensation, no manual ISO setting (though you could use DX stickers to fool the camera or simply tape over the DX codes on the film canister to fool the camera into thinking any film was 100 ASA. DX range is 50-3200, so you can shoot pretty much any modern film. Program mode is the only exposure option. Note that the mode selected does not persist through power-downs, so every time you switch the camera on, there is a possibility of shooting a flash off in someone’s face.

Allegedly, the camera is able to automatically compensate or fire the flash in backlit conditions (per the manual), but it is unclear how the camera would be able to detect this. The camera has a dual-element SPD cell, which suggests that the camera compares an inner zone and an outer zone to figure out what the scene looks like.

Lens and focus system. The Yashica T series (not to be confused with the Contax T series) is all built around a 35mm f/3.5 Tessar T* multicoated lens (and it is a Tessar in construction with 4 elements in 3 groups). The use of 35-38mm lenses with moderate maximum apertures (3.5-3.8) was a widespread phenomenon in Japan; it seems possible that this combination allowed the use of simpler lenses with high performance. Every manufacturer seemed to make a compact camera with a similar lens. 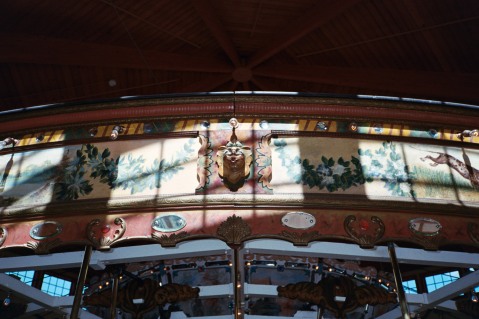 Is the lens sharp? Yes, and that is why people put up with the other quirks. This is a mid-aperture shot on 400-speed film, and if you can blow this up, you can see that it is crisp right into the corners. Now this time with more light: 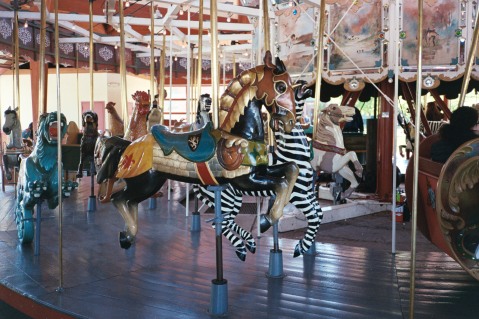 And now for the obligatory out-of-focus analysis. Not bad. But then again, it’s a Tessar. 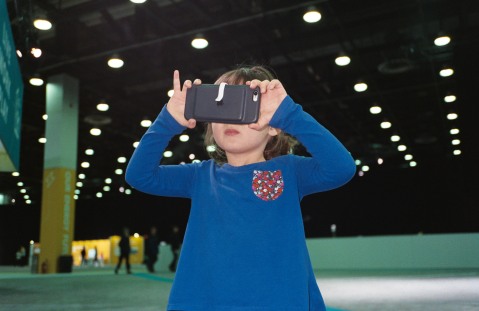 Early examples of the T series had passive AF based on Honeywell patents; later versions sported active infrared windows and measurement, meaning that the camera range-finds by bouncing a beam off the subject and measuring the return time. This kind of system stops working at about 20-30 feet (that is why the camera has an ∞ setting. Shutter is behind the lens and runs up to respectable 1/700 sec.

It is important to focus with the center of the brackets (the circle) on the subject. When the shutter button is half-depressed, the exposure and focus lock.

Viewfinder. The viewfinder is a small but clear Galilean unit with with an oval RF reticle, parallax correction marks, and two lights: solid green for focus lock (blinking when AF fails or is inside the 25cm close-focus distance) and red for flash status (solid when it will fire; blinking when charging, solid in no-flash mode where there will be a slow shutter speed).

The viewfinder is small and is more resistant to blackout than most. But it is no Canon Sure Shot Owl, Canon P, Nikon F3HP, or Fuji X-T1.

On/off sequence. The T4 Super opens with a sliding switch on the front near the top. A mechanical linkage retracts a circular plastic lens cover, and the camera comes on. Flipping the switch back causes the lens to retract and the camera to switch off. The lens barrel is the thing that keeps the lens cover open.

Autofocus/shutter release. The “half press” setting on the camera requires a very light touch; it does not have a tactile click. As a result, if you miss the status lights coming on, you might shoot the picture without intending to.

Shot sequence. The camera reads distance with a half press, extends the lens to achieve focus, and then retracts slightly after the shot. There is a moderate shutter lag. If you are fixated on shutter lag, consider a Canon Sure Shot 120 Classic, which has a Leica-rivaling 0.06 firing time. I will get to a writeup on that shortly.

Flash. Get used to it. Unlike its polite, more expensive Contax cousins, the Yashica does not have a way to change the default from “auto flash” on power-up. You will forget to turn the flash off. You will be surprised when it fires. You will ruin some pictures.

Noise level. Terry Richardson is not sneaking up on naked people with this camera. Sounds like a point and shoot and makes a bright flash.

Conclusion. They say love the sinner hate the sin; here it is hating the camera but loving the pictures. Well, maybe not exactly, but this is a now-very-expensive camera with quirks, and if you can learn to live with them, you will gain a lot.