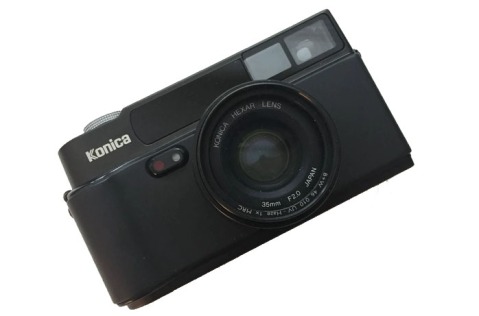 This is the text of the page that had its debut in 2001 and (for better or worse) helped trigger Hexar-mania. Last update was late February 2018.

Overview: (Scratching off where there was grime)..”H-E-X-A-R.” Captain, HXR is a Canonet that was sent out of our solar system in the late 1960s. It encountered a machine planet where the computers examined it, understood its mission, and elaborated on its mechanics. It grew, and it evolved… and gained consciousness.

History: the Hexar came about in 1992, reportedly a last vanity project for the Konica engineers who worked on the FT-1. Or so the story goes. Some of the key technologies on the Hexar, such as a sealed lens barrel, projected brightline finder (zoom on some models, albeit always with fixed framelines), and tri-window AF showed up first on the 1988 models MR640 (weather resistant) and shock-resistant Genba Kantoku (“Site Supervisor”), a ruggedized camera designed for construction sites. In fact, the wind motor of the Genba K. sounds like the Hexar in “loud” mode.

Do you also see a resemblance to the Fuji GA645 with the autofocusing side-pod module? 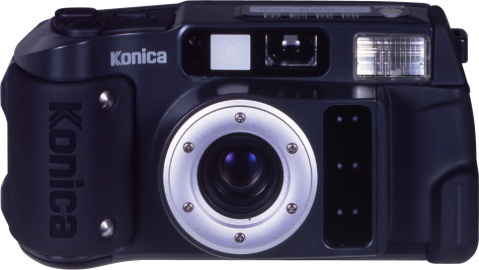 Tokina’s site, oddly, was the only one that had a picture of a clean GK. Most examples of this camera, including mine, look like holy hell. This is the fixed 40mm version, which has a shallower silver protrusion.

Before you confuse the Genba K. with a poor man’s Hexar, understand that the lens and operation are totally different; the Genba Kantoku has a 40/3.5 (3 elements, 3 groups) or 40/3.5-60/5.2 bifocal lens (3/3 and 6/6) of completely different construction. And on the Genba Kantoku, here are your controls. All of them: flash on. Flash off. Self-timer. Manual rewind. No nonsense here.

Later models of the Genba Kantoku (the 28mm and 35mm second-generation models in 1994) apparently acquired the Hexar’s funky electronic shutter and accordingly had maximum shutter speeds of 1/280 sec.

Construction. The construction is all metal, with the exception of the top and bottom covers, which are a period-typical black chrome (or bright chrome) plated on polycarbonate. Which is a good thing because if they were brass covers, this would be a very heavy camera. Konica made a big deal about the front barrel being a heavy alloy casting to add the retention of precision in focusing.

Lens. The lens is the Hexar’s raîson d’etre. In fact, it is legendary.

The 35mm f/2 Hexar (actually, Hexanon) lens has the imaging qualities of the 35/2 Leica Summicon-M and the general design of the Nikon 3.5cm f/1.8 W-Nikkor (the rangefinder lens from the 1950s and 60s – you know, the one whose Leica screwmount version sells for $1,800 and up today). Konica won’t go further than to call the design “Gaussian,” but Nikon has acknowledged on its 1001 Nights Site that this is a Nikkor derivative. Konica’s own technical materials reflect this design intent, although they also mention a slight recomputation aimed at allowing an electronically controlled aperture and shutter to be inserted between the lens groups. The aperture has 6 blades that form a perfect circle down to f/5.6, after which point, aperture shape is not that important.

This lens has been revised slightly and rereleased as the 35/2L Hexanon (chrome) and its optical twin, the 35/2 UC Hexanon (black paint), both in Leica mount. These are beautiful lenses run in limited numbers (1,000 and 2,000 respectively).

The lens out of the original Hexar AF has been independently converted by many into a Leica M lens (though this takes a lot of work and frankly is not as elegant as Konica’s own ported versions). But it is a lot cheaper way to do it.

This camera featured in a Konica white paper that discussed the camera’s total control of chromatic aberration. It also posts some impressive MTF compared to the lenses whose formula and optics it replicates. Wide-open, it exhibits a very smooth falloff from the center; at f/5.6 it is uniformly great.

Viewfinder: The viewfinder is a 0.7x window, with crosshair reticle for 2-channel infrared autofocusing, green light for focus confirmation, focused-distance indicator, shrinking-field, parallax-corrected projected framelines, and +/- indicators for over/underexposure. The front and back covers are glass, which is good for durability.

Rangefinder and limitations:  It is probably not a stretch to say that this camera has the most sophisticated active autofocusing system ever put in a camera.  The heart of the system is a unique 2-channel infrared rangefinding system that gauges distance in 290 steps out to about 10m.  It uses a central emitter and two receptors to help eliminate errors caused by parallax or subject reflectivity.  If the camera fails to see a return IR beam, it focuses to 20m, which is the hyperfocal distance of its 35mm f/2 lens.

That is already insanely good, but the camera then applies an aperture-specific focus correction to account for focus shift (also described in a Konica white paper). The Hexar’s lens is optimized for wide-open operation; its spherical aberration causes the focus point to shift as the apertures get smaller.  The Hexar calculates this error and corrects as its goes.  Too bad AF SLRs don’t have this feature.

But wait.  This camera also can automatically compensate for 750nm or 850nm infrared film, too.  No IR marks, no guesswork.

And for the free set of steak knives, the camera’s AF system is temperature-calibrated as well.

If you need true infinity focus, you hit the MF button once. If you hold it down, you can set your distance manually (and the camera remembers every time you come back – useful for hyperfocal technique).

Nice design features: Programming, programming, programming. This camera is built around a first-rate lens and two key concepts. One is hyperfocal focusing. The other is perfect balancing of flash using a combination of techniques, including traditional distance-aperture programming, rear-curtain synch, and stopping-down mid-exposure. It is important to note that the Hexar cannot use high-voltage flash units like the early Vivitar 283. Only modern, low-synch-voltage units should be used to avoid frying the internal circuitry.

The black model features a silent drive that slows focusing and advance to the point of being absolutely silent. Even in that mode, it still focuses and advances faster than you can. In fact, this camera can focus, compute exposure, and control flash in complete darkness. Instantly. You can add silent mode and a number of other advanced features to the Hexar Silver, etc. through a control sequence that you can find on the ‘net.

Odd design limitations: 1/250 second top speed. Not that odd, really, if you consider the clear aperture those shutter blades have to cross and the fact that electronically-controlled shutters have different design limitations. Did you really think your Canonet QL17 shoots 1/500 at a true 1/500? Didn’t think so. Some people complain that you can’t use 800 ASA film with this camera outside. That misses the point, which is that you use lower-speed film to take advantage of the lens’s resolving power. Even 400-speed film is pefectly adequate, as in the big picture below (Kodak Supra 400). There is no cable or remote release, but I am not sure if this is a problem in a camera without a mirror to cause vibration. It does have a self-timer.

In Operation: With a very short learning curve, this camera is a snap. Ergonomics are identical to an M6 with a grip. On P, you set it to your preferred aperture and it stays as close as it can without blowing your lowest hand-holdable shutter speed. Metering is dead-on, and the whole thing is so quiet most people think it’s digital — or ask when you are going to take the picture (although you already had). The shutter is completely vibration-free. Flash operation is perfect every time, even more accurate than TTL, because it is not thrown by subject reflectivity. 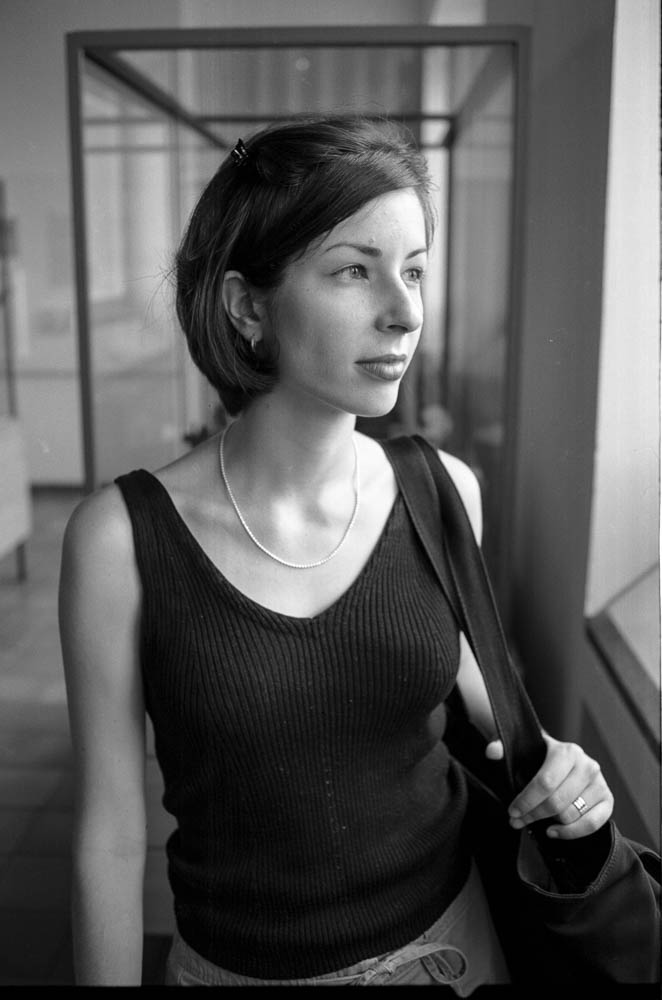 Balance/feel: This camera balances really well and feels really solid, which is all you really need. The wheel that controls the aperture is on the top, and accessible by your right forefinger. It feels… good. It could use textured grips, but it’s not a big deal.

Durability: It’s a tank. Well, two (major) incidents. First was pulling the camera off my desk. Camera hit two drawer handles, put a nick in the floor. No damage. Christmas — got really loaded at the family party and dropped camera in the snow on the way back into the house. My sister came in the next day with the camera frozen in a sheet of ice. I chipped the ice off and very thoroughly dried it. No damage – and no fungus or haze 7 years later. It took the picture above after all of this! Because you have the luxury of a 46mm filter size with this camera, I strongly recommend screwing a B+W KR1.5 into the lens and leaving it there. When you have a filter screwed in, the lens barrel becomes almost completely air- and water-tight (all movement is within). As you can see above, it does not degrade lens performance to do so.

Long-term issues: Note that the 2-position shutter switch (focus… shoot) is rated for about 30,000 cycles – and it will eventually wear out. If you started with a new camera today, you would never physically be able to hit this limit. But since the oldest Hexars are now almost 25 years old, watch for this. The symptom is that the focus does not lock when you push the button halfway down in “loud” mode – and it becomes a problem for off-center subjects. To some extent, cleaning the switch can help, but the ultimate fix is to replace the dome switch with a similar DSLR part, which will set you back $100-150. But once you have that done, it seems unlikely that you will wear out the next switch.

Accessories: Hexars are no different to accessorize than any other compact, fixed-lens camera. But here are some suggestions:

Bottom Line: I think the ultimate test of the best all-around camera is what you would grab if told that you were leaving on an around-the-world trip and you had five minutes to pack. This would be mine.

One response to “Konica Hexar (AF)”