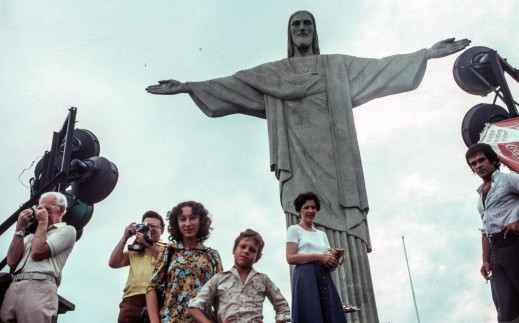 Everyone in this picture is dead. The man on the left could not beat actuarial tables. The next man over, in the yellow, had a stroke. The teenage girl died of breast cancer. The boy met an industrial accident. The lady in blue was hit by a car. And the guy on the right was killed when his girlfriend’s husband came home unexpectedly.

One. Ok, so I made that all up. What I do know is that this picture is from Rio de Janiero in the spring of 1979. I know my grandfather took it. I know it’s on Ektachrome, in a Bell & Howell slide cube, in a tray of slide cubes, in a box, in my basement. And that is all I know about it.

Two. For fun, I put to a Facebook film group the question of how to deal with this — and thousands of other slides that contained no people that I (or any other living person) could identify, with little artistic or editorial merit (I could easily pull out the ones with family members, which is a small fraction). This was due to being lazy; I could have just fed these into a Nikon LS over a few weeks. I asked what lab could scan pictures like these so that I would be “done” with them, throw them out, and free up some physical space. The reaction was as expected. What? Discard originals? They are more archival than digital, so why downgrade? The reactions ranged from puzzlement to indignation.

Three. Part of the difficulty in dealing with modern photographers is the idea that every sperm is sacred (apologies to Monty Python…) and that you can never, ever dispose of a physical piece of media, no matter how worthless. I chalk this up to being an artifact of digital – people don’t edit their digital work because storage is cheap. That carries over into a feeling that one can’t dispose of any piece of film, ever, never, not ever. Also, when film is expensive, you’re throwing money away, right?!

Do these guys know that in ye olden days (meaning just 25 years ago), people tossed slides all the time? I mean, there is no rotary slide magazine that is a whole number multiple of any length of film, unless you were shooting old rolls of 20 and hit 100% of the time… and not even the Almighty shoots that many keepers. Before matrix metering, it was hard as hell to shoot slides. Ok, shoot them well.

Do they know that when you’d pick up prints from a minilab, you would put the rejects right in the trash? How about leaving those neatly scalloped four-frame strips of badly stabilized C-41 negative in an acidic paper envelope for fifteen or so years?

Do they know that when you only get one frame to come out on a roll of film, you don’t have to save all six strips of negatives? Or, if you don’t like that one frame, any of them?

Do they know people threw away test rolls all the time? Today, I was adding up some numbers and figured out that I had shot about 1,900 rolls of film in 25 years – and that I had probably pitched fifty whole rolls of test pictures.

Four. The archival film protection business had a boom in the 2000s. Granted, old vinyl photo pages were a train wreck. “Try our new polyethylene ones. They last for centuries!” There was always something new: non-acidic fixer, paper, binders, sleeves, chemicals. Your pictures will live forever. Forever, of course, was a lot shorter time when everyone smoked.

With digital imaging came “archival” inkjet paper and the thousand-year, erm, hundred-year archival, pigment-based inks. Pushed partly as a way to justify charging big money for inkjet prints perceived as less valuable than chemical prints, these new materials turned out to be a way to perpetuate prints of bad pay-to-play nudes, early Photoshop compositing abominations, and anodyne and provincial landscapes. Had this work faded faster, it would have been immolated in trash-to-energy plants before that method of waste disposal was outlawed. Now they just stuff landfills, visual interest improved occasionally by the overturned bottle of Palmolive thrown in on top of them.

Today, we worry about the longevity of digital. You could record things on Mitsui gold DVDs. Or M-Discs. Or asynchronous offsite backups. Or in the cloud. Or in a holographic data storage array in a quartz crystal when that day comes. The possibilities are endless because we are constantly coming up with new ways to hoard and new ways to pack bits into smaller spaces using more permanent materials.

The economics of archiving materials is a fascinating study. Depending on what you are trying to preserve, it might be like paying more for a storage unit than anything in that unit is worth.

Five. As John Chrysostom would have said in the 400s (or actually did say…) “all is vanity.” Somebody once said that you don’t die until the last person forgets you. Many cultures and people have taken credit for this line (I first heard it on Westworld), but like all good retransmissions (or appropriations) of someone’s culture, it gets recycled because it actually is useful.

When we think about photography and archivism, we might be solving for the wrong variable. We try to make everything last forever using blunt force. The actual problem is motivating preservation in others, not in achieving it ourselves. You might think that color film will fade in 20 years. Or black and white in 100. Or that your prints will discolor and fade. Or that JPGs will somehow be obsolete in the future and unreadable.

The real danger is not time, or technology, or the elements, or phlogiston. The real danger is that the work will fall into the hands of someone with no interest in it – or for whom the effort of understanding the work is overwhelming compared to any potential benefit. When you’re at a secondhand store looking in that shoebox at the counter (or were, in the Before Times), you always wonder what kind of philistine gets rid of family pictures. Well, it could be you. Or me (see above). Or our children. All it takes is for someone to be looking at a collection of random pictures of strangers and to give a shrug of the shoulders. Someone to decide that there is no room for one more photo album. Or no point in renewing a cloud storage subscription. Or that they need that 12tb hard drive for something else. Or they lack the decryption key to open the drive with the files (nota bene: this is coming).

Six. Things become valuable for a couple of reasons: intrinsic value and attrition. An Ansel Adams print would be valuable even if the supply was less finite. By the same token, we preserve a lot of historic buildings and cars that were poorly designed or poorly made — but are the last exponents of their age. The average person has no ability to influence this aspect of his or her photography except (a) to be brilliantly good (bonus points for the back story that includes dying young of consumption) or (b) have his or her output survive some extinction event that wipes out trillions of other images. Let’s all shoot for “brilliantly good.” Dum spiro spero.

Seven. Maybe what we should do is not fixate so much on the hoarding so much as encouraging future preservation. Is it an uncomfortable subject because it’s not something you can buy?

You might find in the end that your time and money is better spent on life experiences than making the record of it last just a couple more years longer. If you do good work and give it meaning, people will find a way to preserve it.