The comparisons are inevitable (if you were born before, say, 1985). They are unnoticeable to Fujifilm’s obsequious band of pre-release “reviewers” (more on this later). But the similarity is undeniable. Fuji has, for its sixth camera based on the X-Trans II sensor and its eighth based on the 2011 Sony 16Mp base sensor, copied the design of a camera given away with magazine subscriptions. Hopefully unconsciously. That said, let’s not denigrate the Time-Life unit too much; it has a 50mm f/5.6 glass meniscus lens that at a small enough aperture will be competitive with multi-element lenses. It also contains so much lead in a ballast plate in the base that the scrap metal content outweighs (literally) the purchase price. Operators are standing by.

The only thing that makes the X-T10’s design really egregious coming from Fuji is that the Fuji X line is supposed to be a better-thought-out alternative to DSLRs. Yet here we are, in 2015, and the most recent two models have aped DSLR designs. Are we as a market that gullible? Do they think this will somehow make it easier for us to swallow giving up heavy SLR gear? Whatever it is, it does not say good things about the market or the manufacturer.

The silly game of making one thing look like another goes back a while. Consider the Horsey Horseless Carriage. Whether it was serious or a parody perpetrated by a rich gentleman, you get the point: 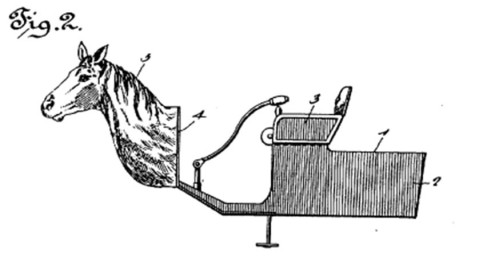 One is left to wonder whether the head was to be sourced from taxidermy or upholstery, but whatever the intent, it was not going to end well for horses.

Mimicry in camera design is not new, but it is a relatively recent phenomenon. In most cameras, form has to follow function; a camera is a box with a lens on one end and an imaging surface (film or digital) on the other. In the old days, there were no twin-lens reflexes that looked like rangefinders and no SLRs that looked like anything else. It is probably also fair to say that with a few exceptions (like the Zeiss Tenax or a couple of Raymond Loewy specials), no one actually cared whether a camera was ugly or not. After all, a Rolleiflex is only attractive in the context of twin-lens reflexes. You wouldn’t put it on a coffee table.

For some time, the proportions of digital SLRs were tied in to the film cameras that spawned them. Some of this was understandable; makers were in many cases recycling the chassis castings/moldings of existing cameras – or reusing key components like mirror/shutter boxes and viewfinder assemblies. When DSLRs started to feature their own purpose-built main castings, there was some carryover that were hard to explain – such as why grip surfaces retained proportions originally designed to house 35mm cartridges. But then again, the Space Shuttle’s engines’ dimensions are ultimately traceable to the size of the rump of a Roman soldier’s horse.

Fuji, for its part, stuck to function in designing its early X-series cameras. The X100 looked like a baby Leica M3, but any combination of an integrated optical finder is going to force a certain layout – the window either goes on the left of the right of the lens, and most people are right-eye-dominant. Yes, there was a little window-frame embellishment, but that has evaporated in the X100T. The X-Pro1 carried very subtle call-backs to the G/GL690-series cameras, but it too stuck to the function-defines-form script for the most part (it is clear given subsequent cameras that Fuji made this camera much thicker than it needed to be, given that it had a non-articulating screen). The XE, XM, and XA cameras looked like other finder-equipped or finder-less bodies – various Panasonic G, Sony NEX, and Olympus EP cameras.

The industry turning point (for the worse) came with the Olympus OMD-E5 in 2012, an unabashed visual clone of any of a number of Olympus OM-series SLRs. There was no reason to stick a pentaprism-looking housing atop a mirrorless camera. Pentax was also right there with its K-3. As if it had passed through a mirrorless camera development stage, the K-1’s top bump suddenly blossomed into a full-figured faux prism.

Fuji was always late to the party, and it took Fuji until 2014 to imitate SLR design in the X-T1, the pretext being that the big EVF required a pentaprism “hump.” Fuji dropped that pretext with the 2015 release of the blocky X-T10, stating now that it did this to recall Fuji’s (forgettable) AX line of SLRs. But the X-T10 does not look like an AX at all; it looks like a rinky-dink plastic camera. And its design appears driven neither by function nor aesthetics. It’s an ugly little box.

Why should anyone care?

On one hand, one would be tempted to ask, who cares? Fuji owners (and potential Fuji owners) should. Like a photographic version of roles written for Jason Statham, Fuji has for three years pumped out camera after camera based on the same sensor and incremental inclusions of off-the-shelf technology. Fuji’s three big additions since the X-Pro1 – namely, high-quality EVF technology, on-chip phase-detect focus, and face-detection – were set up for consumer products before the X-Pro1 came out (check out the timing of the NEX-5R and its patents). By the time the X-E2 came out, all the pieces were in place for a serious update to the X-Pro, the “flagship” camera. Between then and now, Fuji has instead pumped millions into design, tooling, and software for multiple minimally differentiated cameras – far more than it would have taken to put an X-Trans II chip, EXR II processor, and better EVF into an X-Pro2. This points to one of two possibilities: (1) the X-Pro1 was such a dog for sales that management required the engineering team to start doing what other mirrorless makers were doing or (2) Fuji has turned to avidly churning the market to keep up market share in the declining interchangeable-lens market, and an updated X-Pro1 was not anticipated to do the job.

1. Looking like what sells. On the first point, it is of some note that the X-E2 resembled the Olympus and Panasonic Micro 4:3 cameras, as well as the Sony NEX-6 and -7 APS-C Cameras. The X-T1 and -T10 have followed other manufacturers’ quasi-SLR digital designs. The lens selection in compacts of both formats (APS-C and M43) also reflects a more into competing with entry-level DSLRs: zooms, big zooms, and big primes.

This direction (physical bloating) undermines what APS-C (and Micro 4:3) were supposed to be about: smaller, lighter cameras. This has never really happened: Fuji’s and others’ lenses are not as much smaller than FX lenses as one might have been led to believe. Part of this may be that it’s cheaper to design big telecentric lenses than smaller, more symmetrical ones that require offset micro lenses. And autofocus probably exerts its own size expansion.

But for people who liked the idea of the X-Pro1, this translates into a camera that is somehow bulkier than a 24x36mm Leica M. That does not seem to be the right direction in an era where camera phones (that everyone is already carrying) are eating into compact camera sales. If aside from a camera phone, we are going to haul around another box with its own lithium-ion battery, one that is not plugged directly into social networking, do we want it to be bulky?

2. Churning and burning. The second possibility is more sinister-sounding – but it is supportable. Fuji’s product releases have occurred twice yearly since the X-Pro1. That is very often considering that the underlying technology has moved very little since fall 2013. Fuji’s marketing strategy for the XF has been simple: use shills to build up excitement, release products at high prices, slash prices when sales start to flag a couple months in, and then build excitement for the next big thing.

Fuji is not alone here, but it seems more visible in its use of “reviewers” to promote the process. The practice began with with some Fuji employees — but at least they disclosed who they worked for. But then it moved on to “reviews” started coming rom (a) semi-pros; (b) Fuji-sponsored photographers; and (c) a few easy marks who believe that whatever just came out – from whatever manufacturer – is the greatest thing ever (we all know who they are). Throw into the mix some hyperventilating Fuji-oriented sites that get revenue when people click through to retailers, and you get the perfect storm of non-objective reporting. After all, whether it trips FTC guidelines or not, who would bite the hand that feeds him? And in a world where people pay good money for SEO work, catapulting your photo business to the top of any search has value.

Then comes the product. It’s great. It takes great pictures. I know this first-hand.

And a few months later comes the burn. Left with a run that it can’t sell, and even absent any fundamental spec change or replacement model, Fuji will usually slash prices 20-30% within six months. This gives an impression that every Fuji model is overpriced to begin with – and in slashing new prices, Fuji puts its own new sales directly in competition with the secondary market. This in turn hurts middle-class amateurs trying to unload old Fuji equipment to upgrade within the line. This is a great strategy for fixing a one-time inventory problem, and certainly no budget shopper in the used market will object. But especially where forced depreciation occurs without some compelling improvement (or even the oddly missing “camera body” roadmap), existing users start to feel burned, and smart shoppers learn to hang back. Why would you ever buy new? Look at completed sale prices on Ebay. Buying an XF body or lens new costs you 30-40% the day you open it. Put another way, Fuji’s pricing practices violate a fundamental rule of luxury goods sales (and let’s face it, a $1,300 camera body is a luxury good for most people): never slash MSRPs. You can have occasional rebates, bundles, or “demo” units. But once you start slashing prices, you begin degrading your brand equity. Or has that happened already?

3. Rewarding risk? Fuji should never lose track of the risks that one takes on a proprietary camera system. XF lenses do not fit anything else. There is no repurposing the same lenses on old film bodies (such as with Canon, Nikon, Pentax, and Leica) – or even repurposing them on different types of digital bodies (you can stick the same Nikkor on an APS-C D7500, FX D4, and 36Mp D810, for example). In a closed digital system. people invest in a collection of lenses in part on the premise that the line is going to continue – and that the line will remain viable compared to other systems. In a sense, everyone knows that they will be replacing camera bodies in 3-4 years. But when real upgrades never come, it causes justifiable questioning. And it’s not just sensor resolution. It goes to functionality:

These are questions that Fuji should be in a position to answer.

Fuji presents a strange case. Its X100 line is fantastic (and its marketing low-key). Even in the XF line, there is little to complain about in image quality. But the reaction to Fuji’s marketing strategy? Maybe the best strategy is to wait out new Fuji XF product releases and just buy used. History, after all, tells us that most of the the prices are inflated anyway.